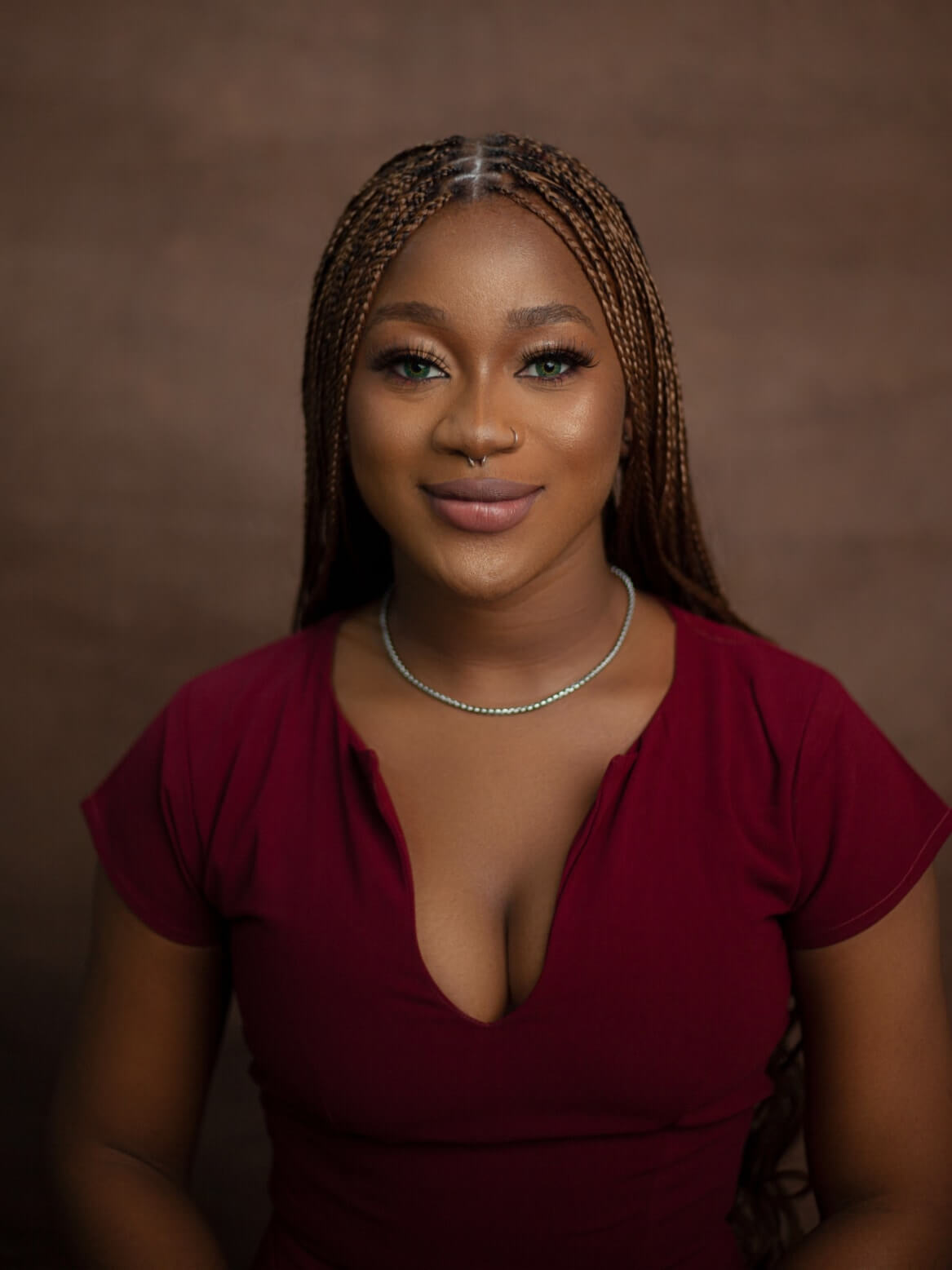 Lola Salehu — Senior Product Designer
Lola is a Product Designer with a background in Real Estate from Lagos State University. Outside Design, she spends her time volunteering for open-source projects and advocating for inclusion and intersectionality in tech.

I am someone who loves experiences, so I like to document memories. I like to write and I like creating photo journals. I like to try new things like new food, places… and I think I have quite a sense of humour too 🙂

I also love to teach. I do speaking engagements at Asa Coterié where I basically pick a topic and teach some people about it.

I had this friend, Jemima who was practising for a talk. As I was listening to her talk about an introduction to Programming, HTML and CSS and all of that. I found it really cool. Seeing my friend be that passionate, motivated me to try programming out, and that was how I threw myself into learning. I started with Java and then gradually moved to front end development.

A lot of the learning was online. I think I also tried learning in physical spaces at some point. I went to New Horizons Computer Learning Center for a bit but I already knew most of the things they were teaching. It was a lot like YouTube tutorials, Free code camp, W3Schools, all these popular programs. So, I just took their content to have some sort of road map. I also did Code Lagos, I learnt Java with them. I did a few courses with Udacity too. Then I got a job an entry job as a Developer.

The job was a start-up and things were rapidly changing. We had a designer on the team and I noticed that every time that we had a feature request or feature change, he would submit a new design by the close of work. Whereas, all of us on the frontend team would struggle with coding for a while. Of course, now I know design isn’t that easy, but back then I thought it was less of a headache. So, I took an interest in the designer’s work.

I started asking questions and looking through content on design. I was really close to burning out because I was doing that and juggling school still. So, at the end of that year, I decided to take a break.

The beginning of the following year was when I started learning design properly. I reached out to a couple of people in the space, and I joined the community at Asa Coterié. I had a few key mentors there, like Pixel Dhan. I think Dan was actually my first mentor. When I reached out to him he said I should read “Design of Everyday Things.” So, I tried to read that as well. We worked on a few projects together.

I also met other designers during the SocialMediaWeek of that time. I got to tell them I was starting out with design and how I was hoping they’d point me in the right direction. I started to write most of the things I was learning about too. I think my write up was also a good way to put myself out there in the international community.

The first time I worked as a designer was on a short project. I didn’t necessarily believe so much in products at that time, but I was in it for the experience. The team I was working with almost made the experience a bad one for me, but Daniel helped to solve it a little. It was a music technology product and they wanted to use AI to recommend music to stores and lounges. It was expected that other people would play and they’ll have these people subscribe to their product. I just thought that although it was great for foreign markets, I didn’t think Nigerians will pay for music. So, with that project, it was more like trying to sell a better idea.

Getting the Paystack job was quite random. I was already pals with some of the people at Paystack. One of them made a tweet about possibly hiring. I replied to the tweet asking him to hire me and he sent me a DM with the application link. There were a series of interviews and test projects and I did those. So here we are now, it all worked out.

Filling In The Gap

There was a lot I needed to learn though and to do that, I tried to air mark myself against the international equivalent of Mike Blackwell. I’d look at works from international designers, read through their articles and just try to find areas I could improve on. Real-life experiences like executing projects and working on a team and observing people’s works were also really helpful.

So, with development, everything is really logical. Like you know that if you’re running this loop or an array, 2+2 will always be equal to 4. With Design, it’s not that straightforward. The challenges came in the form of figuring out a road map, to be honest. With programming, you can just search the top 10 developer’s road maps for 2021 and find a bunch of things that people need to learn. Back then with design, it wasn’t so clear. So, if one doesn’t have a clearly defined path or find a way to track one’s growth and all that, one might just be swinging in whatever direction the wind takes one.

There’s a sweet advantage to being a designer who is a developer. Especially within the dynamics of a team, being able to communicate with developers isn’t a problem. This is because I am able to implement my designs even though it is not my job description. So, I can easily communicate my design and how to implement it with the developer. It also makes it easy to create designs that are functional and implementable.

Feedback is a part and parcel of the process. I know how fundamental it is to actually get stuff right. There’s this feedback process where I work, we have 10%, 50% and 99% feedback.

10% feedback comes at the start of the project, where the director wants to look at the draft for the first time. Obviously, it’s 10% work so they know that you’re nowhere near finished but they just like to see the ideas one has on how to go about the solution. The 10% stage is really important because any wrong impression or ideas that might affect the solution can be removed right that instance and you’ll be set in the right direction.

Then the 50% where you haven’t finetuned everything, but you can see the whole solution coming to form and then they can also throw in feedback that would also be necessary.

The 99% feedback is where everything needs to be top-notch. You are looking at things like visual appeal, you are wondering if you can represent the information better… at that point, you probably already hashed out the solution to the fundamentals.

I like the process and it makes work much easier.

Necessary Skills for a Designer

First and foremost, problem-solving is a skill every designer should have because most of these tasks are about solving problems within different contexts. And then there is a need for excellent communication skills because that can literally make or break a designer. One needs to know how to communicate with mentors, clients, and teammates.

It is also important that a designer learns very fast. Learn the fundamentals of design and how to quickly apply what you have learnt. And of course, it is also important to have people skills. It helps one network easily and establishes relationships with other designers.

For me, these are the skills one should have.

I believe Community is quite relevant because there’s only so much you can do on your own as an individual. I think I’ve come to believe that even though I can be quite self-sufficient, at some point it is just easier and more efficient to seek help. It is better when you can have access to other people and their opinions and just try to tally them with yours.

It is the same with having mentors. I go to people that have experienced whatever problems that I have and ask them for suggestions and help. With mentors and communities, you get the right information at the right time, be aware of opportunities, be given opportunities to also talk about your work and share experiences with other people.

So, it is quite important because I don’t think I would have gone as far or as fast as I did if I went at Design on my own pace.

There’s this argument over Forms and Function. For me, I feel like design is a means to an end. I know that before design got to the point it is in now, companies were doing well on their own and so we have to look at design as a means to an end; is it solving the problem it is meant to solve? Because a design might not be considered visually pleasing but solves the problem it is designed for. And that, for me is what matters. So, yeah, functionality over aesthetics.

I draw a lot of inspiration from designers from all over the world and I’m always constantly trying to benchmark my work against theirs. I’d typically look at direct and indirect competitors in the product’s market, carry out a SWOT analysis by considering specific factors like their Strengths, Weaknesses, Opportunities, Content and Design and applying what works to the project at hand.

As for my heroes, I’ll like to say these are the people who have directly influenced my work and have closely motivated me over the years. They include; 🕊Oke-Obi Nathaniel, Daniel Abayomi, Teslim Alabi, Lade Tawak, Jan Haaland and David Ukauwa.

My favourite tools are the community centred/knowledge-based resources like Figma Community, Builtformars, Mobbin, Growth.design   I like them because they help one understand how great product teams think, improve on those ideas, and in some cases speed up the execution.

Adobe Lightroom is my favourite app and that’s because I like the innovation and simplicity their product brings to the task of editing pictures. It’s a useful photography tool, especially on mobile.

It simply means solving problems. In my current daily context, it means designing products, services, and experiences to solve people and business problems with financial technology.

So, my advice for anyone starting today is first; just breathe. I know it can seem overwhelming because there’s a lot to learn and so many resources to pick from. But the best thing anyone going into Design can do is to be intentional about their learning. It is also important to establish structure and draw a road map of what one wants to do, stipulating things they need to learn and then work from there.

Also, be very open to feedback because it’s entirely how you get to where you need to be.

Want to see what else Lola Salehu is up to?
👉🏽   @LolaSalehu or

Nemi’s background is in Communication & Media studies. She takes pride in being a plant parent & Mortal Kombat champion and enjoys time buried between books.