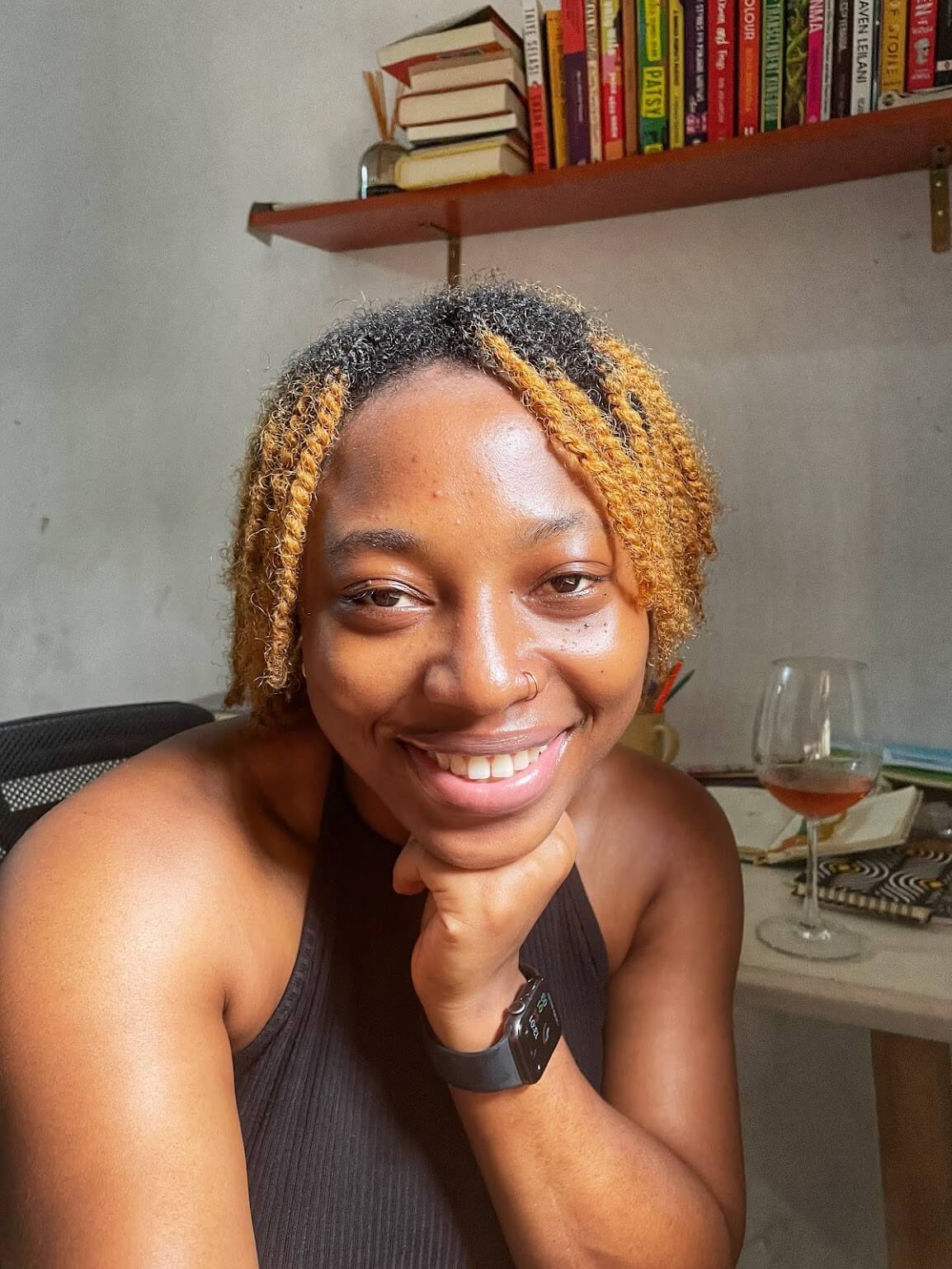 I am really just someone who wants to enjoy a good life. I enjoy reading books, my favorite genre being African literature. I like to lie to myself that I go to the gym. I do go to the gym but not as consistent as I want everybody to believe. I like to watch movies sometimes, or just go through Pinterest or Twitter. I just want to enjoy life and travel, and see places, even if I am always the shortest person wherever I go. That’s Eniola.

Up until 2018, I knew nothing about the tech world. I got bored with the mandatory youth service (NYSC) and to kill time, I started trying my hands on different things including shoemaking. A friend introduced me to coding and he put me on to freeCodeCamp.

Learning to code was very tough for me at first, I just wasn’t getting it, neither was I enjoying it. But then one day I got an email from Stutern, inviting me to learn UI/UX. I didn’t know what it was, but it sounded really interesting. So, I asked about it and practised a little bit, that was when I decided to honour the invite. I applied for that boot camp and I got in. I was at the camp for about three months; learning from different people on how to design, the basics of UX/UI… It was really interesting because now I look back and I acknowledge that that was the best way for me to learn. It was very hands-on and was practical. We had different tutors that were already working as product designers, they took us through the different aspects of design, what working in tech was like and other things.

My first job came from Stutern. The way the Stutern model is set up is to match one with a job after completing the classes. I remember being so nervous on my first interview with this company called Swifta. I wasn’t sure I knew enough since I had just been learning for three months. But it went quite well, as they weren’t looking for the perfect designer, they just needed to know I was willing to learn.

I was paid about ₦75,000 (about $214) to be an intern at Swifta, with prospects of moving to full staff, but I soon realised that I wanted more. I was spending a lot on commuting and it was driving me crazy. I knew I needed a remote job and to achieve that, I created a plan. I started to work on my portfolio, taking on side jobs, adding more things to my portfolio, looking for other jobs. In fact, I was moving from one job to another, looking for the best fit and a place to learn and be better. In retrospect, perhaps I should have been a bit patient but I guess it is all part of the process. I was posting on Behance too and that was where I got my first real break. Someone reached out to me there and that was it.

I work on the mobile design team for Barter. Barter is a remittance product. My day usually starts with stand-ups in the morning where we usually talk about our tasks, ask for feedback and all of that. Then I either try to review previous work or brainstorm on what to work on for the week. Then I go to Figma and try to start work.

In between, I like to take breaks. I’m either on Twitter or watching films and sometimes there are meetings in between. What I try to do is have a to-do list and try to stick with it.

My design process depends on a number of things. This usually includes the nature of the project, what stage the project is in etc. It usually starts with getting a PRD on what I’m supposed to do and then I ask myself, ‘what am I supposed to do? What is the problem I’m trying to solve? Are there other people that are already solving this problem? What are they doing? What have they done? How can I improve on that experience that exists?’

The questions help me come up with solutions. And then the next step is to test even though there isn’t a lot of testing done in Nigeria. So, it’s usually just straight to launching.

I think my biggest challenge with the design process is just getting the work done. I think it’s a concentration problem because I’m always thinking of so many things I want to do. But then to concentrate and start is where the problem is. To combat this, I just try to start small and then build up from there.

I draw inspiration from Mobbin sometimes, and then other times I check out Dribbble. And as far as heroes are concerned, my heroes are those designers that have japa- ed

I like Pinterest a lot, it doesn’t have all that drama associated with other social media apps.

I used to have this belief that I’m not a creative person. I don’t know how to draw or do a lot of things. Especially seeing other people’s visual design. Visual design has always been a challenge for me and I used to feel like I would never be good enough to do really good visual design. But then throughout my career, I learnt that while visual design is really important, it is not what makes a good product. Thankfully though, I have gotten better at visual design over the years, through practice.

Another thing is that I often feel like a fraud. I feel like I do not know what I am doing. I battle with imposter syndrome a lot, but then I constantly remind myself that the reason why people hire me is that I have been able to prove that I can get the job done.

It’s very tough because, sometimes, in your mind, you have done your best but then it isn’t enough. I usually try to ask for the exact problems identified and also solicit suggestions on how to improve.

I have realized that people don’t know how to give feedback in a way that can help you. They condemn without stating what exactly they find off about the job, so instead, I try to draw out what their exact grievances are.

Communication is an important skill, especially when working in teams or there are other stakeholders in the design. I try to explain why I’m taking this route, explain my design decisions, it might not make sense to them, but when you explain and try to give examples too, they will understand why you’re doing what you’re doing.

I think Community is an integral part of my success. I found out about Usable through the guys at Stutern and started attending. Almost everyone I know, I met there and they have helped me a lot; there were those who reviewed my work, those who recommended me for jobs, and those who were there to push me to be better. It was a random person that came to talk to us about tech that gave me inspiration for my portfolio and even helped me with the coding.

On regrets, I only wish that I started earlier. I would have told the younger me to stop being scared and just start.

I believe Design thinking is about trying to properly understand the people you’re designing for, it helps us as designers question our assumptions about our users, be more empathetic, and at the end of the day build good and usable products for our end users.

First, I want them to know that Product Design is not as glamorous, or as easy as it is being sold, it requires a lot of brainpower. It isn’t the ‘easy way’ into tech.

Also, I actively tell anyone trying to move to tech to join a community. I think the design community was the best thing that happened to me. I can’t overemphasize the role that mentorship and community will play in the life of anyone starting out in design.

It is equally important that they learn to market their works and sell their services wherever they go.

So, to anyone aspiring to go into tech, I say find a community and be open enough to network with people. You will find the help you need if you just ask.

Want to see what else Eniola Abiola Aminu is up to?
👉🏽

Namnso is the Lead Product Designer at Flutterwave and Co-Founder of Kimoyo. He leads the team responsible for Flutterwave’s Rave and Payouts and also spends his time mentoring at Figma.