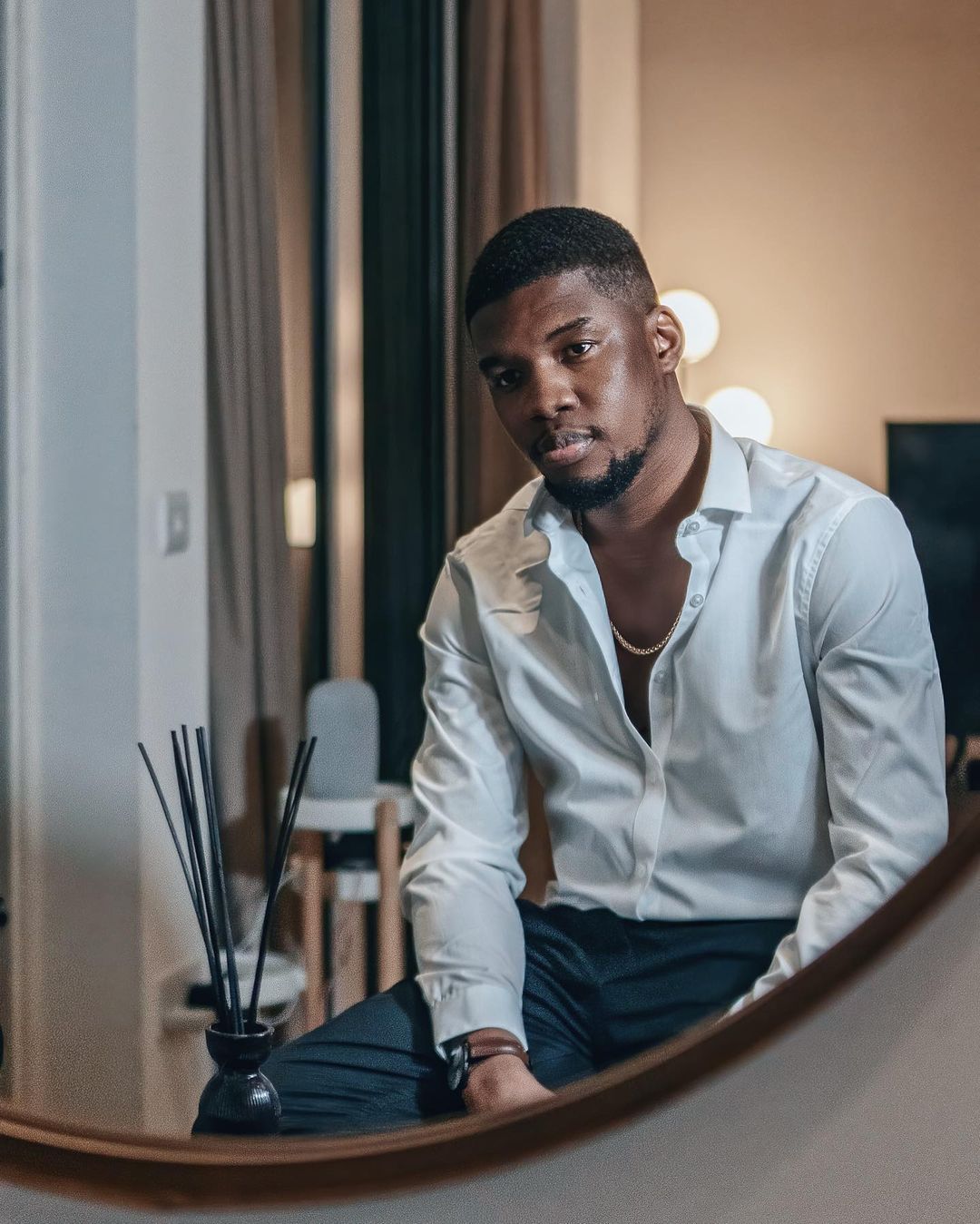 Elijah Kingson — Product Designer
Elijah currently designs for growth and engagement at Revolut and likes to cycle and take pictures in his spare time.

I like to think of myself as “curious”; curious about the origin of things, or how things become what they are and I find myself always asking ‘why’

I think photography is something I’ve also recently become more interested in. I’ve always been fascinated by storytelling with photography, but now it’s something  I’m actually trying to be good at. I enjoy listening to music, from regular day-to-day music to scores that are used in movies. And then there are other random things I enjoy as well like gaming, sports, filmmaking and so on.

Outside of that, I generally enjoy consuming content, either on Twitter, YouTube or Instagram, then reading blogs or online magazines. I try to stay active too, taking walks, cycling, and sometimes going for a run. Occasionally, I listen to podcasts.

I think the first time I did anything design related was in my dad’s office when I was about 12. Usually, they’d pick me up from school, and drop me off at my dad’s office before taking me home. He had this old desktop in the office that I played games and did a lot of random things on. They installed Corel draw on it at some point and one day, my dad just asked me to design him a complementary card.

I can’t really remember how that conversation went and why he thought that I would be able to do it, but it led me to figure out how to use Corel draw. There was somebody in the office at the time as well that I was asking for help, after a while I created the first draft, showed it to him and he was impressed.

Going to the University and studying Computer Science exposed me to web design. But I think I consciously started to develop the skill during my internship. In Nigerian schools, there is usually that industrial training thing that everyone has to go through. So, I took that time to learn to program.

At first, I picked up Python, then later on I started building websites with HTML/CSS & JavaScript and it was fascinating. I got very good at it and eventually started taking on paid freelance gigs.

When I got back to school, I organized an event for people interested in learning about tech. A speaker at one of those events introduced me to a startup building an e-learning platform for people to learn vocational skills. I got offered a sales gig which I accepted.

On my first day on the job, I had a conversation with the founder of the startup where he learned about my web design skills. He decided I was a better fit as a front-end person. That’s how my role switched.

I got interested in UX and my curiosity did the rest. I was drawn to it. I was intrigued by digital products and digital experiences as cliche as that might sound. Just being exposed to the internet and seeing websites was interesting, I remember the first time I discovered the AWWWARDS website and saw the things that people were creating and just being fascinated by all of that.

I remember consuming a lot of content on Youtube to learn about the entire process. I read a lot of blogs like NN Group, UXDesign.cc, and Hackdesign.org.

I wanted to transition to being a UX Person. Someone that didn’t only care about the end product. Someone who cared about the users’ context, psychology, and behavior.

I had some of the skills but I was struggling to identify as a designer. No matter how much I learned, I needed external validation. A bit of that validation came after I got my first job as a UX Designer.

Yeah, I think one of the biggest challenges I faced at the start of my career was finding structured learning resources for product or user experience design. I can’t outrightly say that they were non-existent but I know that they were very hard to find.

Another challenge I had was getting validation around the work I was doing. I wasn’t connected to people that could help me access my skills and give feedback/guidance. I eventually found people but it was initially a challenge.

The way I tackle feedback now is obviously a bit more “sophisticated”. If it’s within the context of a product where there’s an established design system, then things are less within my immediate control. So, if I’m trying to get feedback about flow, for example, something very specific, I know how to get that feedback.

But in terms of taking feedback outside of a system, I think what I try to do these days is get the people I’m collaborating with, whether it’s stakeholders or the team to determine and understand the goal. This way, it is easier to accept people’s perspectives and for others to accept mine.

I think every designer needs to develop their ability to ask the right questions. ; Being able to take abstract ideas and apply them across domains is also a very useful skill.

One thing that’s sure to get me into a “flow state” when working is music. On some days it’s Chillipop, other days it’s Amapiano. Whatever the case, I like the rush of energy that a good song/playlist brings.

In terms of more structured sources, I like to look at interaction patterns across other products and I am currently using Mobbin for this (Dribbble/Behance once in a while). Listening to people discuss ideas also helps, could be a podcast or a conversation or random sources like  YouTube and public discussions on social media.

I really like FIGJAM. It’s a solid tool for brainstorming and collaborating with other people.

I don’t know that I have a single favorite app but one app I really love is Duolingo. It features cleverly designed characters and learning formats from audio lessons to stories. It’s about the easiest, most fun, and engaging way to learn a new language.

I think design thinking means prioritizing the needs, context, and proclivities of users. It also means starting with a clear problem statement or a strong opportunity.

I feel like UI is embedded within UX or it’s a fundamental part of the experience of your user. So, I sometimes find it funny when people try to decide which is more important. I think they are like two parts of the same whole.

I believe community is very important. I think one of the first communities that I found was Usable. There were a bunch of communities online, some of them had offline extensions in form of meetups and conferences in Lagos at the time. I turned to Usable, and also interacted with designers, and asked for their help where I needed it. I put myself out there by asking questions and sharing my ideas and perspective.

A prediction I have about the future trend of design is the emergence of design on decentralized finance and design around blockchain. I think it’s going to catch on. So, we’re going to see more blockchain designers.

I’d say sign up for design-related courses and try to get a solid foundation. Try to understand or at least get a strong sense of the fundamentals of design.

There’s also a community, so, engage with people, find people who are designers, and follow them. That way, when you start experimenting or working on projects, you’re able to share your work, get feedback and refine what you’re designing.

There’s also the part where you have to be thoughtful with receiving feedback. In many cases, advice is contextual, depending on your goal and what you’re looking out for, you should take things with a pinch of salt and know that not every approach is right for every situation.

I’d recommend that when new designers want to get a job, they do as much research as they can around salaries/compensation and the culture at the company that’s hiring them. This is because the companies that one works for will really shape one’s experience as a designer and as a human being.

Obviously, in addition to that, make sure that you are networking and you are interacting with people meaningfully, the interaction shouldn’t only benefit you, try to see how you can give back as well depending on circumstances.

One thing I wish I had as a young designer is patience. I wish I was a bit more open to sharing my draft ideas. One of the most powerful resources that designers can take advantage of as they develop their craft is feedback on their drafts. I didn’t realize it early enough and I spent too much time trying to iterate on my work in isolation.  The importance of feedback does not only apply to design but to other disciplines as well.

Want to see what else Elijah Kingson is up to?
👉🏽   @ElijahKingson or

Amaka is a UI/UX Designer with an interest in Illustrations and Digital Arts. She currently works as a Product Designer at Chowdeck.